BIM and ARES: Additional Notes on the AERTWORKS US Deal

BIM and ARES: Additional Notes on the AERTWORKS US Deal 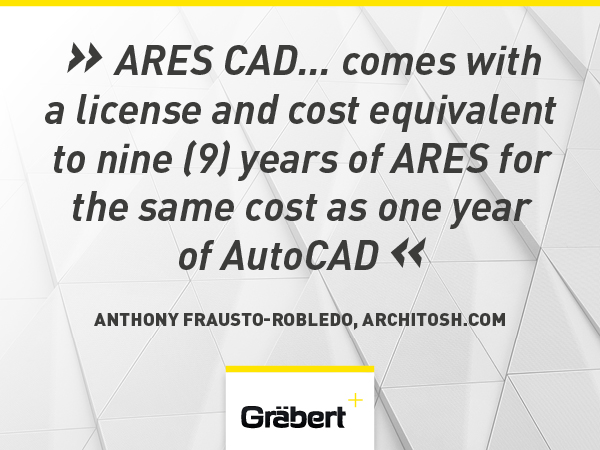 ‘BIM is becoming more central to Graebert’s ARES Commander. The latest technologies are aimed at the realities of drawings production.

In Graebert’s press release this week announcing their new reseller partnership with US CAD distributor AERTWORKS, the German software company made note that AERTWORKS has discontinued its US distribution of BricsCAD in favour of ARES CAD.

ARES CAD, which comes with a license and cost equivalent to nine (9) years of ARES for the same cost as one year of AutoCAD, has been the chief (.dwg), file-based CAD competitor of BricsCAD, in a mutually shared attack on US-based Autodesk’s AutoCAD. For its part, Autodesk has hardly rolled over in this pitched battle for its legacy 2D/3D CAD dominance. Still, the US-based CAD company appears to have a significant weakness when competing for large enterprise accounts due to the fact that whether it be Graebert or Bricsys (now a part of Hexagon) the cost economics offered by the two European companies are highly competitive. This may be a classic case of “comparative advantage” given where each of these companies is based and what staff and talent resources they employ.’

Subscribe to our newsletter and get the 600+ pages eBook Inside ARES:

BROWSE THE BLOG BY CATEGORY

OR BY PRODUCT NAME

Did you know that ARES Touch, our mobile DWG Viewer & Editor, is available for both Android and iOS?