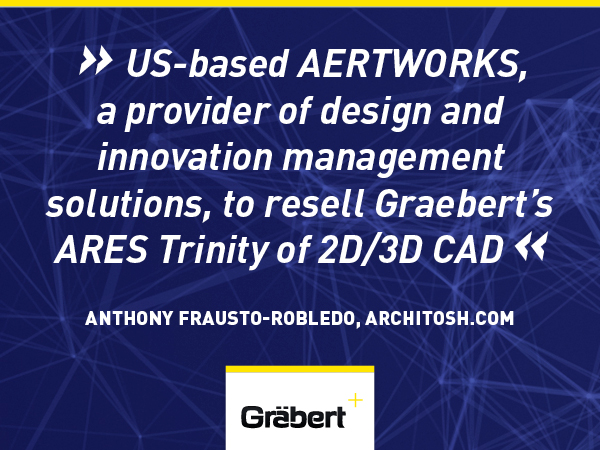 ‘ARES CAD technology to be further accelerated in United States market due to new reseller partnership between Graebert and AERTWORKS.

Germany’s software firm Graebert has formed an agreement with US-based AERTWORKS, a provider of design and innovation management solutions, to resell Graebert’s ARES Trinity of 2D/3D CAD software for desktop, mobile, and cloud in the United States of America.

ARES CAD Technology
Graebert’s ARES CAD technology is based on the (.dwg) file format in native form, meaning the software is essentially fully native compatible with Autodesk’s AutoCAD; it can read, create, and modify files directly in the same format as AutoCAD, but for a fraction of the cost. ARES CAD technology at the desktop level feels largely familiar to its US rival’s software, from dialogs to keyboard commands, facilitating the ability for companies, teams, and individuals to transition from AutoCAD or another (.dwg) based CAD platform really easily.

The ARES CAD technology is the leading alternative for (.dwg) based CAD systems after AutoCAD itself, with the second-largest installed base of CAD users in the world. This would include Graebert’s CAD technology as offered by Graebert’s OEM partners, importantly, DraftSigth by Dassault Systèmes. Millions of users globally work with ARES CAD technology every day, says the company.’

Subscribe to our newsletter and get the 600+ pages eBook Inside ARES:

BROWSE THE BLOG BY CATEGORY

OR BY PRODUCT NAME

Did you know that ARES Touch, our mobile DWG Viewer & Editor, is available for both Android and iOS?